Efforts to de-escalate undesirable situations will continue through discussion and diplomacy, says General Joseph Votel, head of the US Central Command.

The head of the US Central Command (CENTCOM) said on Tuesday that the United States is in a “very robust dialogue” with Turkey over Syria.

General Joseph Votel made the remarks at a forum on the situation in Iraq and Syria organised by the United States Institute of Peace, a Washington-based think tank.

Emphasising the importance of communication between the NATO allies to de-escalate situations and try to resolve issues through discussion, Votel noted that Washington and Ankara have an “open line” of dialogue.

“So where they feel the need to conduct operations for their own security, we have the ability to talk with them about that and make sure that we are de-conflicted and that we are not putting our forces in a position where they have to make kind of binary choices here,” he added.

Describing the PKK’s Syrian branch YPG as a “principal partner on the ground”, Votel also claimed that Turkey’s military operation to remove terrorists from Afrin had slowed down coalition operations against Daesh.

He said pressure against Daesh must be maintained and discussion and diplomacy must be utilised to help de-escalate undesirable situations.

When asked whether YPG’s mobilisation to Afrin jeopardised the fight against Daesh and if there is still a path to eliminating Daesh from remaining areas, Votel said there is always a path and the coalition will continue to look at how it will work through this issue.

Touching on the Manbij issue that has created tensions between the US and Turkey, Special Presidential Envoy for the Global Coalition to Defeat ISIS (Daesh) Brett McGurk as the other speaker at the panel said the diplomatic process has continued to resolve such tensions.

McGurk also claimed that residents of Manbij are relatively secular and that the presence of certain “Islamist” groups among Manbij opposition groups could lead to ideological separation within the city.

Turkey launched Operation Olive Branch on January 20 to clear terrorist groups from Afrin, which was liberated last month amid growing terror threats posed from the region to Turkey.

Ankara said it might also extend its operation further east to Manbij unless the YPG terrorist group leaves the strategically located city.

However, US military support for the terrorist YPG in Manbij has strained ties between Ankara and Washington and has led to fears of military clashes between the two NATO allies, since there are roughly 2,000 US troops in the city.

The US has supported the YPG under the name of Syrian Democratic Forces (SDF), which is considered by Ankara as the Syrian offshoot of the PKK terror organisation that has waged a over three-decade war against the Turkish state.

American support for the terror group has long vexed Ankara as Washington views the SDF as a “reliable partner” in its fight against Daesh and continues to provide it with arms and equipment in the face of strong objections by Turkey.

The PKK has fought a 33-year war against Turkey that has resulted in tens of thousands of deaths. 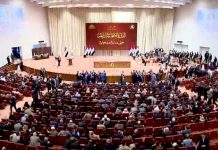 Iraqi Parliament approve bill to expel US forces from country 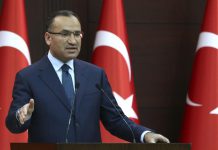 Turkey to move into Manbij if YPG refuses to clear the...