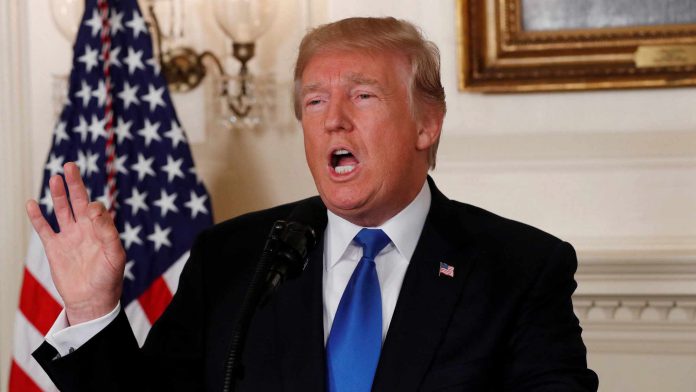 WASHINGTON/ANKARA (Reuters) – U.S. President Donald Trump said he would announce a decision on Tuesday about the future of an international nuclear agreement with Iran, as Tehran hinted it might stay in the 2015 accord even if Washington pulls out.

Trump has repeatedly threatened to withdraw from the deal, which lifted economic sanctions on Iran in exchange for Tehran limiting its nuclear ambitions, unless European allies who also signed the deal fix what he has called its shortcomings.

“I will be announcing my decision on the Iran Deal tomorrow from the White House at 2:00pm,” Trump said in a Twitter post on Monday.

Under U.S. law, Trump has until May 12 to decide whether to reintroduce U.S. sanctions on Iran, which would deal a heavy blow to the agreement and likely upset Washington’s European allies.

Bringing back U.S. sanctions could also trigger a backlash by Iran, which could resume its nuclear arms programme or punish U.S. allies in Syria, Iraq, Yemen and Lebanon, diplomats said.

Trump has all but decided to withdraw from the accord but exactly how he will do so remains unclear, two White House officials and a source familiar with the administration’s internal debate told Reuters last week.

One of the officials said it was possible Trump will end up with a decision that “is not a full pullout,” but was unable to describe what that might look like.

Under the agreement with the United States, France, Germany, Britain, Russia and China, Iran strictly limited uranium enrichment capacity to try to show that it was not trying to develop atomic bombs. In exchange, Iran received relief from economic sanctions.

Iranian President Hassan Rouhani suggested on Monday that Iran could remain in the accord even if the United States dropped out, but said that Tehran would fiercely resist U.S. pressure to limit its influence in the Middle East.

Rouhani said the Islamic Republic had been preparing for every possible scenario, including a deal without Washington – which would still include the other signatories that remain committed to it – or no deal at all.

“We are prepared for all scenarios and no change will occur in our lives next week,” Rouhani said in a speech broadcast live on state TV.

“If we can get what we want from a deal without America, then Iran will continue to remain committed to the deal. What Iran wants is our interests to be guaranteed by its non-American signatories … In that case, getting rid of America’s mischievous presence will be fine for Iran.”

Britain, France and Germany remain committed to the accord and, in an effort to address U.S. complaints, want to open talks on Iran’s ballistic missile programme, its nuclear activities beyond 2025 – when pivotal provisions of the deal expire – and its role in the wars in Syria and Yemen.

British Foreign Secretary Boris Johnson, in Washington this week, said the deal’s weaknesses could be remedied.

“At this moment Britain is working alongside the Trump administration and our French and German allies to ensure that they are,” he said in a commentary in the New York Times.

Diplomats say Iran would rather the deal remain intact out of concern about a revival of domestic unrest over economic hardships that mounted over the years sanctions were in place.

Sanctions imposed on Iran in early 2012 by the United States and European Union over its nuclear programme cut Iran’s crude exports from a peak of 2.5 million barrels per day (bpd) before the sanctions to a little more than 1 million bpd.

But Iran re-emerged as a major oil exporter in January 2016 when international sanctions were suspended in return for curbs on Iran’s nuclear programme.

On Monday, Iran’s oil ministry’s news service quoted senior officials as saying the country’s oil industry will continue to develop even if the United States pulls out of the nuclear deal, and Tehran would see the accord as operational as long as it can sell oil.

Iran’s clerical rulers have repeatedly ruled out reducing its sway across the region, as the United States and its European allies may seek as part of any new deal. 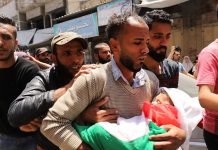 On World Refugee Day, 1.4 million Palestinians try to scrape by...

US urges Turkey to maintain status of Hagia Sophia as museum 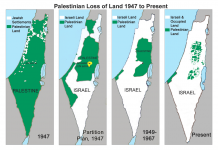 Israel took control over 774 Palestinian towns and villages, and destroyed...